Alcon (SIX/NYSE:ALC), the global leader in eye care, today announced the Food and Drug Administration (FDA) approval and its initial commercial launch of AcrySof®IQ PanOptix®Trifocal Intraocular Lens (IOL), the first and only trifocal lens for U.S. patients undergoing cataract surgery. PanOptix is clinically shown to deliver an exceptional combination of near, intermediate and distance vision while significantly reducing the need for glasses after surgery.

PanOptix is already one of the leading presbyopia-correcting IOLs in more than 70 countries. It is designed for today’s active lifestyles, from viewing mobile devices and computer screens to high-quality distance vision in a range of lighting conditions. The new lens uses ENLIGHTEN®Optical Technology, a proprietary design that optimizes intermediate vision without compromising near and distance vision. Available in spherical and toric designs, PanOptix is built on Alcon’s proven AcrySof IQ IOL platform that has been implanted in more than 120 million eyes globally.

“We are proud to bring this new class of IOLs to the largest eye care market in the world,” said David J. Endicott, Chief Executive Officer of Alcon. “We are leveraging Alcon’s years of experience with PanOptix in other countries to provide the best possible training and support for U.S. surgeons. Our goal is to ensure optimal outcomes for cataract patients looking to correct their vision at all distances, with the vast majority of them never needing to wear glasses post-surgery.”

The FDA approval of PanOptix was based on a pivotal study at 12 investigational sites in the U.S. With this single trifocal lens design, PanOptix patients demonstrated exceptional, uninterrupted vision. The results also showed high patient satisfaction with more than ninety-nine percent of PanOptix patients saying they would choose the same lens again.

“The U.S. ophthalmology community has been eagerly awaiting FDA approval of PanOptix. While participating in the clinical trial, I saw first-hand the impact of this lens on my patients,” said Kerry Solomon, M.D., Carolina Eyecare Physicians,PanOptix clinical trial investigator. “We know patients undergoing cataract surgery today want a replacement lens that delivers the vision they need to live full, active lives without always being dependent on glasses. PanOptix is an excellent lens option to address these needs and is clinically proven to deliver an outstanding range of vision.”

Alcon plans to begin training U.S. ophthalmologists and making inventory of PanOptix and PanOptix Toric IOLs available through the rest of 2019 into early 2020. As part of its patient education efforts, the company will soon launch a dedicated PanOptix website and multimedia awareness campaign. A similar effort is planned for eye care professionals with special launch activities slated for the annual meeting of the American Academy of Ophthalmology in October.

A cataract is a cloudy area in the natural lens of the eye that affects vision. As a cataract develops, the eye’s lens gradually becomes hard and cloudy allowing less light to pass through, which makes it more difficult to see. The vast majority of cataracts result from normal aging, but radiation exposure, taking steroids, diabetes and eye trauma can accelerate their development.5Cataracts are the most common age-related eye condition and the leading cause of preventable blindness.6Twenty million people in the U.S. age 40 and older have cataracts.5Cataracts are treated by removing the eye’s cloudy natural lens and surgically replacing it with an intraocular lens or IOL. More than 98 percent of cataract surgeries are considered successful, and patients typically can return to their normal routines within 24 hours.

Presbyopia is a common, age-related vision condition in which people have difficulty focusing on things up close. It involves the gradual loss of the eye’s ability to focus on close objects, such as smart phones, computers, books and menus.8Almost everyone will experience presbyopia to some degree as they age, with symptoms often first appearing as an individual enters their 40s and continues to worsen into their 60s.8In the U.S., an estimated 112 million people experience vision issues due to presbyopia – a number that’s expected to continue increasing.9The condition is not a disease, so it cannot be cured; however, there are safe and effective ways to correct presbyopia, including eye glasses, contact lenses or refractive surgery.

Potential Side Effects: Due to the design of multifocal IOLs, there are some side effects that can be associated with the AcrySof® IQ

PanOptix® Trifocal IOL models. These may be worse than with a monofocal IOL, including visual disturbances such as glare, rings around lights, starbursts (rays around light sources), and reduced contrast sensitivity (decrease in ability to distinguish objects from their background, especially in dim lighting). These side effects may make it more difficult to see while driving at night or completing tasks in low lighting conditions such as at night or in fog, or in a dimly lit room after surgery as compared to before surgery.

Further, a toric IOL corrects astigmatism only when it is placed in the correct position in the eye. There is a possibility that the toric IOL could be placed incorrectly or could move within the eye. If the toric lens is not positioned correctly following surgery, the change in your astigmatism correction by the IOL, along with any necessary correction with glasses, may cause visual distortions. If the lens rotates in your eye, you may need additional surgery to reposition or replace the IOL. 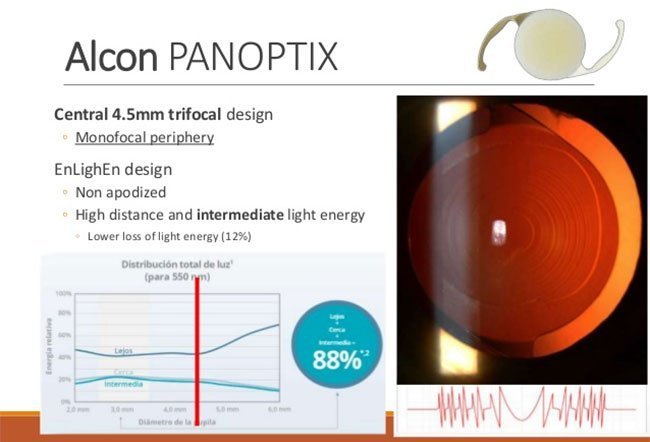