Astigmatism and cataract? A toric IOL can fix both.

Most people with cataracts want not only to have clear vision after cataract surgery, but freedom from eyeglasses as well. One thing that can prevent that from happening is residual astigmatism after surgery. Astigmatism is very common before and after cataract surgery. Almost one in three people who are candidates for cataract surgery in the United States have at least 1.0 diopter (D) of astigmatism, which is enough to cause noticeably blurred vision without eyeglasses or contact lenses. One study of refractive errors found that 29 percent of the U.S. population has between 1.0 and 2.0 D of astigmatism, 6.5 percent has between 2.0 and 3.0 D, and 2.2 percent has at least 3.0 D. These findings suggest nearly four out of 10 Americans have a significant amount of astigmatism.

Like toric soft contact lenses for astigmatism, toric IOLs have different powers in different meridians of the lens to correct the asymmetric power of the eye that is characteristic of astigmatism. Cataract surgery with a toric lens implant (IOL) is essentially the same as cataract surgery with a conventional IOL, but with a couple of important differences. Prior to surgery, measurements are taken to enable cataract surgeons to choose the most beneficial toric IOL power and the required orientation of the implant in the eye to correct the astigmatism successfully.

Toric IOLs have special markers on the peripheral parts of the lens that enable the surgeon to see the orientation of the astigmatism correction in the lens. Once the toric IOL is implanted in the eye, the surgeon then rotates the lens so the astigmatism correction is properly aligned for best results. Use of a toric IOL during cataract surgery does not increase the risk of common cataract surgery complications, but a misaligned toric IOL can cause blurred vision that cannot easily be corrected with eyeglasses or contact lenses. Brands of toric IOLs include AcrySof IQ Toric IOL (Alcon) and Tecnis Toric Aspheric IOL (Abbott Medical Optics).

Research has shown that toric lenses produce excellent visual results after cataract surgery and can correct astigmatism more effectively than limbal relaxing incisions. One study found that 94 percent of astigmatic eyes treated with toric lens implants had 0.50 D or less astigmatism and 98 percent had 0.75 D or less residual astigmatism after surgery, enabling people to see acceptably well without glasses or contact lenses. 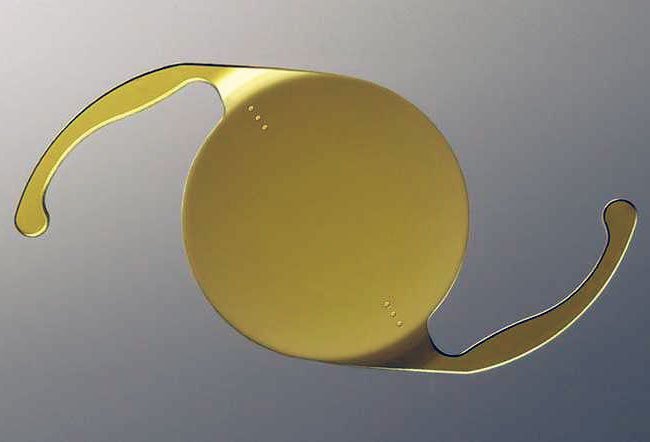